Charlotte does not like to be ignored. Her boyfriend had a habit or ignoring her and she was getting worked up about it. She decided to put an end to it once and for all. She looked for a way to make it all stop and she came up with a perfect plan. She forced him to open his mouth while lying on her lap and she spit into it and made him lick and swallow it.

Svenja did not like the work this guy in the office had done. She wanted him to meet and even surpass his targets but he did not even meet them. She wanted to motivate him through an unorthodox way. She called him to her office and she made him lie down and she tied his beck to her desk. She then forced him to open his mouth and she spit into it

Lady Diana Diamond is a hot mistress. But behind that hot face and body is a weird fetish. She has a spit fetish. She likes to have her spit licked by her slaves and sometimes she likes to play with it herself. She has a dedicated blog for her spit fetish and she has lots of fans who love watching her videos and can't have enough of those spit videos. 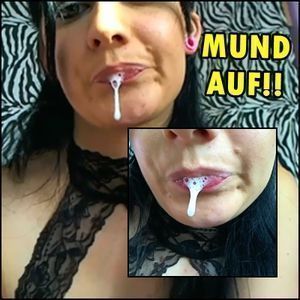 Lady Suzanne is a mistress with a weird fetish. She likes her spit and enjoys playing with it. She does not make slaves lick it and use it to humiliate them like other mistresses do. She is comfortable playing with it on her own. She goes to the bathroom and watches herself in the mirror spitting. She sometimes licks her own spit and enjoys how disgusting it is. The more disgusting the better for her.

Mistress shows her friend how to humiliate

Mistress BlackDiamoond likes to humiliate losers and slaves. Nothing makes her feel better than degrading them. She wanted to teach her friend Lady Chanel how to do it. She went ahead and forced the loser to open his mouth. She had accumulated saliva in her mouth and she spit it all into his open mouth. She made him swallow it and she asked her friend to try what she had done.

Lisa Jordan and her spit fetish

Lisa Jordan is a hot and naughty mistress. She loves to play with her saliva. She enjoys disgusting people with it and if she is in the mood, she likes to humiliate her slaves with it. Today she was in the mood and she made her slave watch as she spit on her crotch before making the slave lick the saliva off her crotch. It was so good she came.

Mistress has fun at her boyfriend's expense

This mistress was mad at her boyfriend. She wanted to break up with him but he begged her not to. While she was thinking about it, she decided to have fun at his expense. She smoked and used him as her ashtray. She also blew smoke on his face and even spit on his face. She prohibited him from wiping it off and instead made him lick the spit on his face.

With an ass like the one this mistress has, you cannot do any wrong. She likes to take advantage of her sexy ass to humiliate guys. One guy tried to seduce her and she invited him to her house. She made him lick her feet, her soles and even smell and lick her dirty and smelly ass. She finally had him open his mouth and lick as well as swallow her saliva.

Sarah is a hot and sexy young mistress. This guy was disturbing her by wanting to sleep with her. She had told him off but he was not backing off. So she decided to teach him a lesson. She invited him to her house and made him lie down on the sofa set before she trampled him with her ass and forced him to open his mouth and she made him swallow her saliva.

This mistress was told that the best way to have a slave submit is making him or her humiliated. She took this message to heart and always treats her slaves like shit. She likes to make them feel worthless and degrades them in many ways. She likes to spit on them or step on spit and make them lick her soles. She also wants them to drink her spit or lick it.